The story of a figure skating revolution 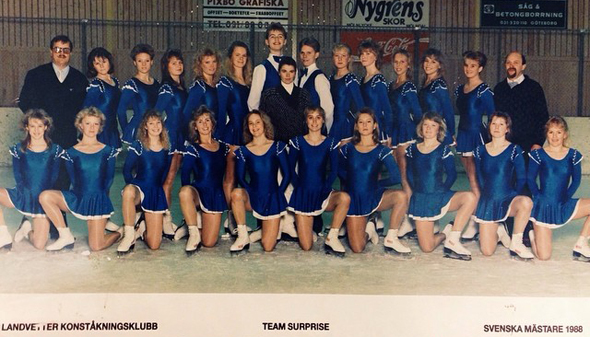 Team Surprise – the story of a figure skating revolution

In the mid 80´s, the president Mrs Ingela Wieland of Landvetter FSC went to Canada to take a look at a fairly new kind of figure skating called Synchronized Skating. Until then it only existed in North America.

A rule book was brought back to Sweden and was studied carefully by the ice dance coach, Mrs Andrea Dohany. She decided to start up her own team, in her own special way. She set about using classical music and a choreographic style most akin to that of ice dance.

The word spread to a few clubs in Sweden who also started up teams. The fact that Mrs Dohany was up to something quite different was clear at the first competition held in Sweden where the team from Landvetter FSC beat the others with ease, and no doubt some pride as well…

It was subsequently decided to hold the first national championships in Sweden in 1986. Only one team per region could attend, and in the west of Sweden there were two teams. One was a team from the city of Gothenburg and the other one was from Landvetter. The local federation decided that the city team would represent the region at the competition. Frustration ran high in Landvetter where it was felt that the best solution would be to let the teams compete for the position. However, the president of the club stepped in and made some research into the different possibilities she could think of. It turned out that there was a region in Sweden that did not have a team of their own and in a matter of a few days, all skaters on the team became members of Västerås FSC in the east of Sweden.

The team entered with the name Team Surprise and only a very few knew who they were. It was felt that it was quite in order to give both the local and national federations, and a few others, a bit of a surprise!

Two days before the competition the whole country came to a halt. The prime minister of Sweden was killed on a street of Stockholm. Despite this, the competition was held according to plan and still almost nobody knew the identity of Team Surprise. Not until they arrived at the arena did people discover the true nature of this Surprise! In the end Team Surprise proudly beamed at the gold medal awards while the official team from the west of Sweden came last.

There is nothing like real results to gain respect, and after this the resistance quickly turned into recognition and perhaps even some admiration.

A few years followed with national championships every year and slowly the amount of teams grew in Sweden. Contact was made with a club in Toronto and in 1989 Team Surprise travelled across the Atlantic to participate in the first international competition in Synchronized Skating along with two other Swedish teams and one from Finland.

Before the event took place, Team Surprise spent a few days with Whitby Ice Fyre to shake of jet lag and to perform a joint exhibition at their home arena. When Team Surprise had finished their routine the audience knew that this was not a team merely there to learn about Synchronized skating. This was something far from what they were used to, and in fact it was rather good.

When it was time to go to Montréal for the main competition, there was a notion that this might be yet another time when the name Team Surprise turned out to be a perfect fit. It is not commonplace to really take the breath out of a crowd, but when the team finished their routine and the music came to a halt, there were a few seconds of complete silence in the arena. Then there was a roar of applause while the whole crowd came to their feet for a standing ovation. To everyone´s great surprise, the team from Sweden walked away with the gold medal and synchronized skating took a great leap to a higher level than ever before. Something new – classical music, intricate footwork, speed, flawless transitions and deep edges were brought into this discipline of figure skating – and it was there to stay. This caught quite some attention in the world of figure skating.

Later in 1989, the first international competition was held on European ground, hosted by Landvetter FSC in Gothenburg. Expectations on the team this time were high, especially since it was at their own back yard. Again Team Surprise won the gold and a week later went to do it all over again in Helsinki.

The “Swedish school” of Synchronized skating started to spread around the world and Mrs Dohany shared her ideas and excellent skating techniques at various seminars, geared towards both coaches and judges. Innovation, both in terms of style, choreography and specific elements, was sometimes frowned upon, but frequently became compulsory elements of Synchronized Skating. Team Surprise held a strong position competitively, but without a doubt, this team was the single most important source of evolution of Synchronized skating in general.

The degree of difficulty increased at a rapid pace, yet Team Surprise were always in the forefront and managed to do that little bit extra to remain firmly in the lead. During the first few years of the 90´s, Team Surprise dominated Synchronized skating, and not once did they finish a competition with anything but a gold medal. Three World Challenge cup gold medals and five World Championship gold medals, along with countless gold medals from national and international competitions, was certainly proof of an exceptional level of quality.

In 1994 the first competition was held in Toronto that put all the teams in the same category, whereas before there were different categories depending on the number of skaters in the team. This was one of the greatest highlights in the history of Team Surprise, beating the home team from Canada in Toronto, skating last in the field to the great music of George Gershwin, and again, a standing ovation. Following that it was perhaps not a big surprise that all the nine judges held the Swedes at the premier position.

When the new century dawned, the first ever official World Championships were held in Minneapolis. The story of success continued, the gold medals were awarded to Team Surprise and by that, an imprint in the history of figure skating was made by the Swedish team from Landvetter.

Following this, many more World Championship medals found their way to Mrs Dohany´s team. Perhaps the most cherished one came at the World Championships in Gothenburg 2005. It is truly special to cement such a success in your home arena, with the world watching in admiration at the sustainability of the success built by Mrs Dohany and her team.

Team Surprise continue their mission of constant progress. Nothing is impossible, only the rules can stop us!